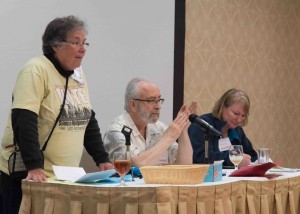 The minutes to this year’s PNLHA membership meeting at our Seattle Conference are now available:
2015 Conference Minutes.

The minutes include election results and new changes to the PNLHA’s organizational bylaws:
2015 PNLHA Bylaws.

About 50 members elected a new PNLHA executive board and regional trustees at the annual general meeting in Seattle on May 3.

After a historic election Washington vice-president Tom Lux emerged as our new leader replacing Ross Rieder who had held the post for 37 years. The close race saw 27 votes for Lux vs. 24 for Oregon vice-president Ron Verzuh.

In the contest for treasurer, Brenda Doolittle was re-elected over Portland’s Janet Stecher (27-21).  Our new secretary is former Oregon trustee Lane Poncy who will vacate her trustee position.

We also elected new people to our trustee groups. Here are the elected and re-elected members from each region.

Oregon region trustees proposed several bylaw amendments intended to increase accountability and extend the opportunity for members to get involved.

Among them was a resolution calling for an executive board feasibility study to create an absentee voting system. Currently, a member must attend the annual general meeting to cast a vote.

We also adopted a resolution from the floor that called for an internal financial audit to be carried out before the 2016 conference that will take place in Oregon next spring.

All amendments were adopted with some minor changes.

PNLHA is part of the WSLC MayWorks 2015 Committee

Friday Social – No charge, but please RSVP to pnlhawa@gmail.com

Registration for Conference REQUIRED (See below)

What Makes You Think the Labor Movement Will Survive? How Must it Change and How is it Changing?  — Bill Fletcher, Jr., Executive Assistant to NVP Augusta Thomas, AFGE

Still Dying at Work: A History of Occupational Safety and Health — Jay Herzmark

‘Unionists will never get a square deal from magistrates’: injunctions, arrests, and jail time for BC Longshoremen in the 1960s — Liam O’Flaherty [30 Minutes]

Register for the Banquet ONLY Mail-In Form

Register for the Banquet Online (Canadian Members) Select only banquet option when prompted.

Room Rate: $119 plus taxes before April 24 – go to link below http://doubletree.hilton.com/en/dt/groups/personalized/C/CTAC-DT-PLH-20150501/index.jhtml?WT.mc_id=POG

(No fee, but please RSVP via mail-in or online forms)

We regret that refunds are not possible, however substitute registrants are welcome.